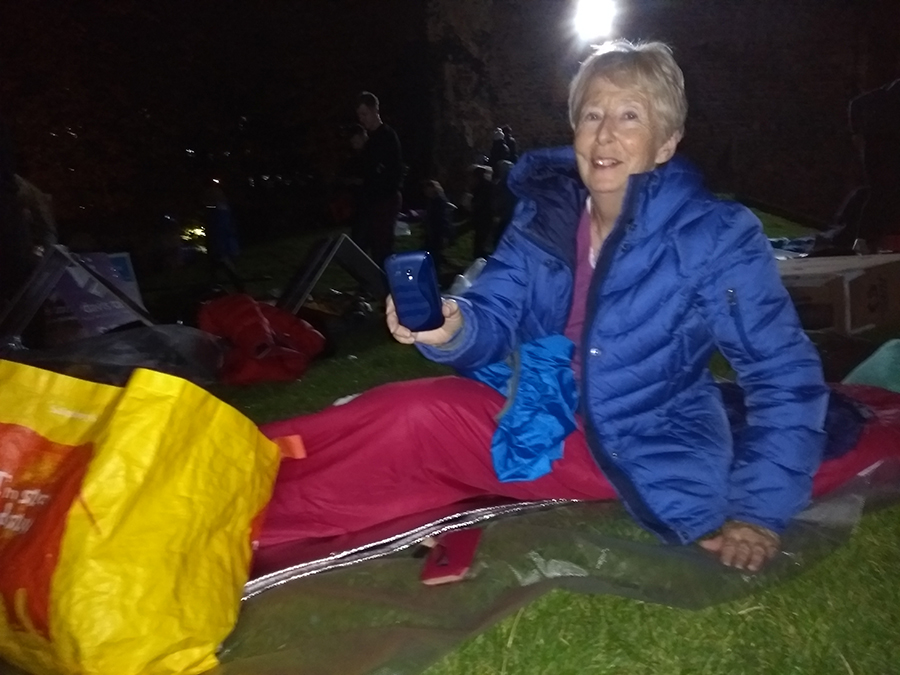 “More rain, heavier this time. It sounds very loudly in my ear as it falls on the tarpaulin which I’ve pulled over my head.”

Big Sleep Out participant, Michele, gives an honest account of a night spent sleeping in the grounds of Reading Abbey Ruins last month.

“Well the day has finally arrived, October 10th, and the weather is looking very uncertain. I gather sleeping bag, foam foil mat and tarpaulin, and manage to cram them into large Sainsbury’s shopping bag. Maybe I should have asked them for a contribution for the advertisement?

“Having carefully considered my wardrobe, I’m wearing my nice quilted and padded jacket with hood, and various layers of clothes aiming to keep out the cold. Ha! A sou’wester and large plastic mac would have been more useful.

“I arrive at St Laurence’s Church just after 6pm and get my sleeping equipment labelled with the letter L for Le Sueur. Very efficient. There are masses of people coming in and the bags are stacking up.

“Time flies by as we are treated to live singing, a lively auction, a raffle, some food and, most memorably, a very moving film about a 60-year-old lady who was on the verge of suicide after having to exist by sleeping on people’s sofas and in their cars because of the withdrawal of her benefits. Someone had told her about Launchpad and the help they offer, and she said the charity saved her life.

“We took part in a quiz on Reading Abbey, Reading and Launchpad. My team made a respectable effort. We had several staff from Sage on our team and one of the guys knew the exact date of when Reading Royals moved from Elm Park. I knew that Thomas Beckett consecrated Reading Abbey, that Jane Austen went to school at Abbey Gate and that Launchpad used to be known as Reading Single Homeless Project. Why then, did we decide that the invention that enabled Huntley and Palmer biscuits to be distributed throughout the world was steam trains! Duh. The answer was metal tins. Ah well.

“Just before 10.00pm we set off to the Abbey Ruins and walked through the Forbury in the dark, which was a new experience. The sleeping area was bordered by narrow sloping banks and my newfound companion, Ann, and I decided that we would set up there. We had been given thin plastic ground sheets. We tried lying on a sleeping bag that was on a foam mat, that in turn was on a slippery ground sheet. We slid. So we moved to the centre where the ground was not sloping – fumbling in the dark, me wrestling with a recalcitrant tarpaulin which had a mind of its own. Gradually people settled down and stopped talking. All was quiet. It was quite balmy lying there to start. I hadn’t even done my coat up or got fully into the sleeping bag. In fact, I was feeling quite warm and wondered why I had so many clothes on. OK try to get to sleep now – it’s going to be a long night.

“A while later… spots of rain, quite refreshing really, not doing any harm. Breathe in the lovely fresh air, ignore pain from lying on back. Then the wind started… and stopped… and started. Each time it would flip the far end of the ground sheet over my head or disturb the tarpaulin which wanted to escape. I try to tame tarpaulin which crackles like mad and is probably disturbing everyone around me.

“More rain, heavier this time. It sounds very loudly in my ear as it falls on the tarpaulin which I’ve pulled over my head. I find that I’ve somehow moved off the ground sheet and am partially on the grass. With great difficulty, I manage to align my body with the ground sheet, foam mat and sleeping bag, and try to secure tarpaulin which just wants to keep blowing up in the air.

“Goodness knows what time it is now. The temperature has definitely dropped. How many hours to go? No idea, I can’t see the time on my watch and don’t want to disturb my ‘bed’ trying to find my phone or a torch.

“Rain stops for a while. What flipping time is it I would love to know. Oh no, the rain’s come back again. Water is rolling in from the ground sheet and has soaked half my blow up pillow. I get large drops of rain in my eye as I try to re-arrange my ‘bed’ again. By now, my right arm is quite wet and I’m beginning to feel cold. I go off into a little dream that Ian Caren (Launchpad’s CEO) is coming to rescue us in a large white van. I must have been sleep or was it wishful thinking?

“I think back to the first time I slept out like this for Launchpad. I had a large narrow cardboard box and when I laid down in it, it felt like a coffin. But at least I got a little sleep. It was the end of August, a different kettle of fish weather wise.

“I think of the people sleeping in doorways in the town. I can go home to a nice warm and dry bed, clean clothes, a loo, a shower and a fridge with food in it. A large part of Launchpad’s work is preventing homelessness in the first place. The average life expectancy of a man living on the streets is 47 and women 43.

“What the hell is the time now? Did I hear a bird singing? Is dawn getting nearer? No, still dark. I find that the bag containing my boots has been in the rain instead of under the tarpaulin. That thing has a mind of its own, totally uncontrollable. Water coming from all over, now I’m one big leak. The rain beating on the tarpaulin is quite deafening. I need to visit the portaloo but no way am I going to untangle myself, put my wet boots on and go squelching over the grass to find it. Knowing me, I would never find my way back. What do women do about toilets when they are sleeping on the streets?

“The rain is now coming down in buckets. I hear noise around me that suggests we might have to make a retreat back into the church. Poke my head out. Yes! The Davis Tate boys next to me have already departed. I have extreme difficulty getting the blasted tarpaulin folded up as the wind has decided to come back and play with it again. Fortunately, Ann gives me a hand. Things that were so neatly packed get crammed in as best I can. My coat is soaked.

“As we walk back to the church, the clock strikes 4. Well, we’ve done 6 hours which I think is fair. We arrive at St Laurence’s Church a soggy, windswept group in various degrees of wetness. Two of the women from Sage actually got a few hours of sleep! Good for them. I’m very jealous.

“Ann departs to catch a bus to Woodley. I leave to get a taxi; my buses don’t start yet.  The driver asks me if I’ve come from London. I say no I’ve been taking part in a fundraiser in the Abbey Ruins for a homeless charity. I drag the dripping contents of my bag indoors and distribute them around the house to dry, and eventually crawl into my nice, clean, dry bed – appreciating it more than ever.”